I know it’s been a while since I’ve posted an update and I do apologize for that. With my health such a roller coaster and my job is as crazy as it is well, I just haven’t taken the time to write.

First of all, let me say that I’m feeling better today than I have in years.  Seriously, with all the crap my body has been going through, it’s about time.  But, I have a feeling that it’s about to change for the worse again.

We found out that the meds for my CML was causing all the fluid to build up around my heart and lungs; more so the lungs.  In short, the oncologist took me off my meds and my pulmonologist took 1.5 liters of fluid off my left lung.  He left fluid in my right lung due to him not wanting the infection to set in on either or both the lungs.  A heavy dose of Lasix and now my right lung is clear of fluid.  In two weeks I see my oncologist and a new med will be prescribed and one of the main side effects is fluid retention.  Oh well, it was good while it lasted.

At this writing, I will be retiring on August 15th of this year.  After 32 years I’ve finally had enough, well, I’ve had enough long ago but I can officially retire when I turn 55 so I’m turning in my notice.  I’ve got a lot of hobbies so I know I will stay busy.

I’m working on a Youtube video about the tornado that went through our city back in 2011 and I’m doing some test shots with my drone.  Let me know what you think of it.  In the video that I’m working on, I will hopefully show some areas of our city that still shows some damage that the tornado left.  I will also show areas of major improvements that wouldn’t have happened if the tornado hadn’t visited our city.

There’s a lot more going on but I’ll post about it later.  I hope you enjoy the video. 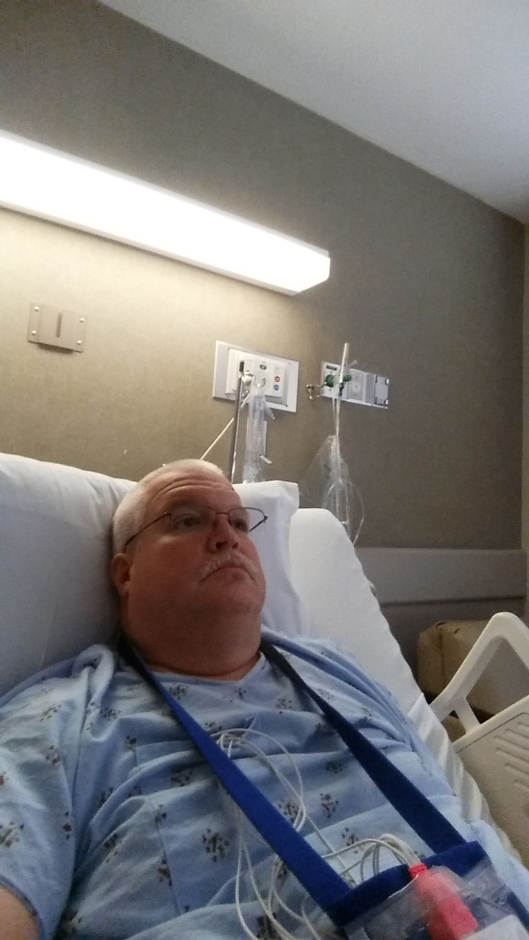 I knew it was only a matter of time before I ended up in the hospital again.  This makes the third time since January.  This time it was a little more serious than all the others.

I went and saw my cardiologist this past Wednesday and it was decided that because my breathing was so bad he would admit me to the hospital for a heart cath.  I was under the impression that the procedure would be done Wednesday afternoon after i was admitted but all they did was blood work. The next morning a heart cath was performed where they found the left artery 75% blocked.  Two stents were installed and I just knew that would help my breathing.  It did not help at all.

After returning to my room I started talking to my cardiologist and he informed me that he had called a pulmonologist in to see me.  A little while later I got carted off for several tests in which one was a breathing test and the other was a sniffing test.  Both of which I failed.  The pulmonologist came in later Thursday evening and basically told me that after seeing the results he had no idea what was causing my difficulties.  All he could tell me was that my diaphragm wasn’t working.

Friday morning I was carted off again for a CAT scan of my lungs.  After returning to my room I was told that I would have a procedure known as a Thoracentesis,  a procedure to remove fluid around my lungs.  At 2pm they removed 2 liters of fluid off my right lung.  I was told that the procedure wouldn’t be painful.  They lied.  I sort of reminded me of my bone marrow biopsy.  Maybe it was the way they did it but it was in the top ten as far as pain.

I never got to comfortable last night because of the pain but as long as I stayed still it didn’t bother me too bad.  I had to hook up my CPap tonight and the pain was still there.  I’ll be taking some pain meds tonight before going to bed.

My daily medicine count has increased by five.  That makes 17 pills that I have to take on a daily basis.  As long as they keep me alive and my insurance holds up I’ll keep taking them.

I go through this every year.  It’s nearly Christmas and I’m just not in the mood for it.  It’s not that I’m depressed; it’s more of disappointment that I can’t afford to more for my kids.  The older they get the more expensive their needs or wants get and we can’t afford to get everything they ask for.

This year my wife and I discussed the fact that the girls will be going off to college next year so we’re going to make sure that we help them with things like laptops and other necessities for college.  With that said, that will be two of everything.  One of the things that we will be trying to get them within the next few months is a car.  This brings up another problem.  The girls haven’t decided on where they want to go to school.  Each one has stated that they want to go to separate schools and if they do go to different schools then we’re going to have a huge problem.  We can only afford one car.  I want the girls to make their own decision on where they want to go to school but in reality they will have to go to the same school or else one will be walking.

And of course I’m somewhat concerned about my CML levels going up the way they have.  I’ve been back to the oncologist and they’ve done more blood work to determine what the next step will be as far as the medications that I will be on, being that the ones that I’m on isn’t working anymore.  I’m hoping to hear back from him this week.

Health Insurance can be a love/hate relationship.  I am fortunate to work for an insurance company and I get my insurance at a discounted rate but it’s still very expensive. I still have copays and I still have deductibles that I have to meet before the insurance will pick up.  I fill sorry for those that have to fork out thousands of dollars each year for insurance.

Today I had to go pick up my new CPAP machine.  When the lady called me to tell me that I now qualified for a new machine I asked her how much I owed.  She checked her computer and said that my deductible had not been met and that my payment would be around $500.00.  I don’t have $500.00 to spend right now and told her that.

I have CML, a rare form of Leukemia.  My medication is very expensive.  It averages out to be around $600.00/pill.  I take one pill a day and my prescription is for a thirty day supply.  My insurance out-of-pocket yearly deductible is $2500.00 and my prescription costs $18,000.00 a month.  That means that I would have to pay $2500.00 for the first month and the insurance company would pay the remainder.  But first, and the most important thing is that I would have to come up with $2500.00 before I could get my first prescription.  Pocket change, right?  Not for me.  Who has $2500 just laying around?  Again, not me.

A little known fact is that some drug companies want you to take their drug.  So much so that they are willing to pay you to take it.  I am very fortunate to be on such a drug.  Gleevec is the manufacture of the drug that I’m on and they offer a financial assistance program to those that can’t afford the ridiculous prices of the medications. I first read about this on their website once I found out that I would be taking the drug.  At first I thought that it was only for those that didn’t have insurance but thankfully I was wrong.  I called them up and they paid all but $100.00 of the $2500.00 of my out-of-pocket deductible.  Wonderful news!!  I pay the pharmacy $100.00 at the beginning of the year and Gleevec pays the rest and I don’t pay a dime the rest of the year for this drug. That’s not the only good news that came out of this.  Remember the CPAP?  It seems that my CPAP was covered under the same plan.  Being that my deductible was indeed met I walked out with a new CPAP and a new mask for $00.00.

Heard from my oncologist this afternoon. My levels has dropped down to .134%.from .734% two months ago. It’s still not zero but it’s slowly getting there. The doctor feels confidant enough to leave me on my current medication. The only thing that was discussed that I’m not to pleased with was the topic of another bone marrow biopsy. We will discuss this more in depth at my next doctor appointment in three months

As stated earlier, I’ve had a problem with my weight since before I got married some twenty some odd years ago.  In 2009 I was at 345 lbs, my heaviest and at the same time, my lowest in self esteem.  I decided then to start doing something about it.

I can’t give all the credit to my weight loss to diet and exercise.  If you’re a diabetic like I am all you have to do to loose weight is to stop taking your medications.  This was not a good idea and do not attempt if you’re a diabetic.  I did it to save money and I thought I could take care of my diabetes with just my diet and exercise.  There was two major things wrong with this; 1) I didn’t exercise and 2) I didn’t stick to any diet.

Things got a little harry after not being on any medications for a while.  It was only after I started loosing feeling in my feet when I decided to go back under my doctors care. In 2011 I had lost down to 311 with a loss of 34 lbs.  Not bad for weight loss but I wouldn’t recommend loosing it the way I did.

November 2012, my doctor and I had a serious conversation about my sugar levels still being way out of control.  I came home that afternoon and got on my treadmill and have been exercising ever since,

I now weight 270 lbs and I’ve still got several pounds to go.  I’ve started riding a bicycle in May of this year and I really love being out doors.  More on my bike riding in my next post.