When I first started cycling, I was using a bicycle that I had purchased from a fellow co-worker some twenty plus years ago.  That meant the bike I was riding a bike that was close to thirty years old.  I used that bike for nearly a year before purchasing my new Cannondale.  The old bike, a Trek, had what I call suicide shifters.  The shifters were on the down tube and you had to take one hand off the handlebar to shift gears.  Most of the time I had no issue with doing so but sometimes, with the bike being so old and poorly maintained, the shifters didn’t work well and I would lose concentration and off the bike I would go.  Luckily, the whole time I rode this bike I never had any broken bones, just minor road rash.

My 35 yr old Trek after a minor incident.  I still have this bike. 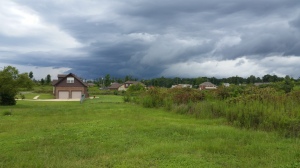 Dark rain clouds during my ride.

As a child I learned how to ride a bike as my mom or dad pushed me up and down the driveway.  I continued riding well into my teenage years.  I would ride for hours on end around my community riding up and down hills that today I look at and realize that I know I couldn’t do it without stopping midway and take a breather.

Sometime in my early adult years, and really for no apparent reason, I stopped riding and again for no apparent reason I sold my one and only bike that my mom and dad bought me for Christmas. It wasn’t until after I got married and after my first child was born I bought a bike from one of my coworkers.  It was a bike that his daughter bought some years prior and she had decided to sell it to get some extra cash.  The bike was a Trek and I paid $150 for it.  When I first got the bike I had to put it in the shop to let them get the bike tuned up for me to ride it.  They put new cables, brake pads, tubes and tires and gave it a good cleaning.  After all was said and done I put an additional $250 for the repairs.  I bet I rode that bike 5 times between then and the time my girls were old enough to ride.  There was always some adjustment to be made to the bike.  The gears would never shift right, the brakes always rubbed and the tires always were flat whenever I wanted to ride.

A buddy of mine at work talked me into getting the bike out of storage.  I used the term “storage” loosely here.  It was stored underneath by deck outside where it caught the brunt of all the rain, sleet, snow and ice for over 15 years.  I dug the bike out, scraped off most of the dirt dobber nests and proceeded to the hose pipe to hose it off.  It needed a lot of work.  To the shop it went, again.  Two new tubes, tires, a chain, cables, brake pads, and a lot of work on the derailer.  The shop kept it for two weeks before I saw it again.

After 1,200 miles, four wrecks, two trips to the ER, another chain and a new rim I finally broke down and purchased a new to me 2013 Cannondale.  I’ve still got the Trek, after all it is an antique. Right now my Cannondale is sick.  I’ve got the back tire in the shop getting a new spoke. Hopefully I’ll be riding her by Wednesday. 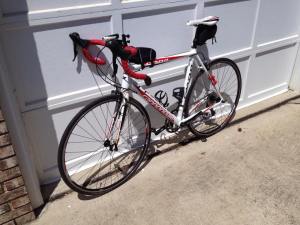 Today was absolutely gorgeous.  Beautiful blue skies with just a few passing clouds with just a slight wind.  It took me a little longer to do my 21 mile route because I kept seeing people that I knew that wanted to talk.  I enjoyed my visits with everyone.

I recently changed the bar tape on my bike.  The bike came with white tape but it soon turned gray with all the dirt and and chain oil from changing flats. I decided that I didn’t want white so I went with red.  The jury is still out on whether or not I like it.

I’ve got a new goal, well sort of.  My son will graduate from college in December of this year.  I’d like to see myself at least 25 pounds lighter than I am right now.  More if possible.  That’s a lot of riding and treadmill time but I think I can do it.

One of my daughters woke up sick yesterday morning now I guess it;s my turn.

I started out in May riding an old 12 speed Trek.  I bought it from a co-worker 15 or so years ago.  According to the serial number the bike is a little over 30 years old.  It served it’s purpose because I didn’t want to go and spend a lot of money on a bicycle if I wasn’t going to stick with it,  Come to find out I love to ride.  In fact, so much so I found a bike on the internet that I fell in love with.   After putting over 1000 miles on my old Trek I purchased a 2013 Cannondal from a guy in Mississippi.

On average I ride about 60 miles a week.  Now that the daylight hours are getting shorter I find it difficult to get my mileage in.  Also, I broke a rib Saturday before last and that too has put a damper on my riding. I have a trainer that I will put to use to help me keep my muscles in shape during the winter months.

My first attempt at riding in the rain.

My riding hasn’t come easy.  I’ve had several wrecks that fortunately only caused minor damage to me and my Trek.   I’ve had road rash, and bent rims but I’ve learned to get back on the bike and keep going and not give up.