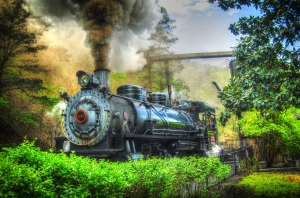 I’m excited to announce that I’ve been invited to attend a “members only” art show. Only people that have been invited can show up and sell their art work.  I’ve heard about this group for many years but never thought anything about it until I posted this picture of 192 out of Dollywood, Pigeon Forge.  This is a single image that I ran through Photomatirx to convert into an HDR image. I know it’s a little harsh for some but I like it as well as one of the members of the art show.  He said that this as well as some other of my HDR images would sell at the art show.  I’m a little excited about it and said that I would think about it.  I’ve never sold any of my work before other than doing a few weddings and photo shoots but I think that’s a little different.  The art show is open to the public and is not until next month so I’ve got some time to get some of my images printed off.  The guy that invited me said that he would help me with the pricing and displaying of my images for sell.  Maybe something will come of this.  Who knows??