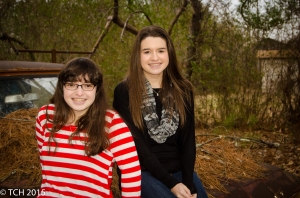 We don’t have a lot of money and having three kids, one in college and two being seniors in high school, makes it difficult “keeping up with the Jones”.  My twin girls share most things they have, including their bedroom.  We can’t afford for them to have a car so they drive my wife’s car to band camp.  They will walk to school once school starts. It’s unfortunate that they have to share so many things but like I said we just can’t afford it to be any other way.  Cell phones became an issue two years ago.  We simply could not afford to have them each have a smartphone, so we purchased each one of them a phone with minimal features.  They have complained many times saying that they can’t do school work and other things that their teachers want them to do. They each have iPods that they do some stuff for school on since they can hook up to the internet at the house wirelessly.  I’ve promised them that if we can afford it that I would purchase them smartphones when it’s time to upgrade.  We still can’t afford it but today their contract was up and I did what I promised them.  They don’t know it yet but they will be happy campers when the Fedex truck arrives on Tuesday.  I’ll have to made sacrifices but at least I fulfilled a promise I made to them.