This past weekend gave me the opportunity to get my bike out and ride.  It was only 10k but at least I got out there.  I had planned on riding more when I got home but my better half had other plans.

While riding Saturday, I noticed some things that needed attention on the bike so I took it to my local bike shop to have it serviced. It’s been since 2015 since I’ve done anything to it being that I haven’t ridden it much since I got sick.  I took it to them yesterday and picked it up today.  I couldn’t have done it any faster but I definitely could’ve done it cheaper.

I’ve already told my better half not to plan on anything for me to do tomorrow evening because I’ve got plans. Plans which includes riding as far as I can and as long as I can. 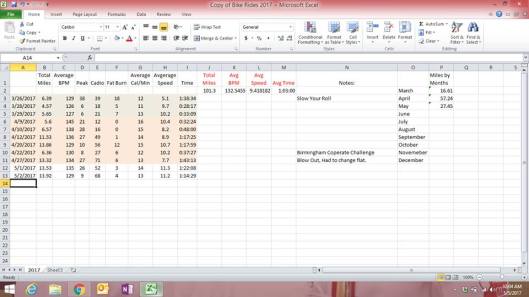 The weather here in the deep south has been less than perfect for bike riding for me.  The last two days it’s been a rainy, dreary day.  Today the temperature hardly rose above the mid 50’s mark.  Tomorrow is forcasted to be warmer but not until mid afternoon.  My plan is to either get a twenty mile in on Saturday or wait until Sunday when I should have more time.

My last ride broke the 100 mile mark.  That’s pretty good considering that only six months ago I was considering selling my bike because of my health.  I’m looking forward to much healther days along with miles and miles of riding.