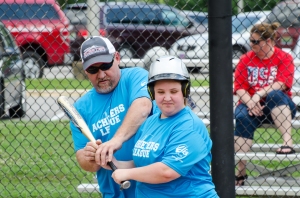 I did another shoot with the Achievers League today.  It was hot but the occasional breeze gave us some relief. We had somewhat of a different crowd this week.  Some showed up that had other plans last week while others stayed home because of other plans that came up at the last minute.  Regardless, everyone had a wonderful time.

The gentleman pictured here is with his daughter.  I’m not sure what her disability is but it was obvious that she needed help and her dad was more than happy to oblige.  He showed her how to hold the bat as I’m sure he did a hundred other times she went up to bat. She took a couple of swings as the ball went past her before she finally nailed it and the ball flew over the third base line.  “Fair Ball” the announcer said as she and her dad took off running the plates.  I wished everyone felt as good as she did as she made it to home plate.  The look on her face was priceless.

As she made her way to home plate from third, I had a flashback when I could remember watching her dad run the plates in high school.  He and I went to the same school from the 7th to the 12th.  I would never have guessed that he would have had kids especially one with disabilities.  Same with me.  I would have never guessed that I would be married for 23 years and have one kid in college and two that will be seniors next year in high school.  Made me feel real old.

My wife and I took my girls to a nearby state park after the ball game and I took some senior pictures of my girls.  It was an emotional day seeing them wear my son’s cap and gown for the pictures.  Where has the time gone?  It doesn’t feel like they should be this old.  Again, I feel old.