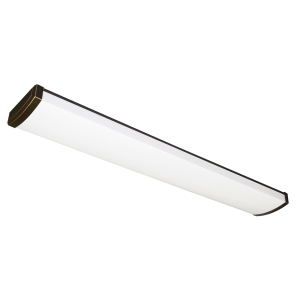 I am in no way an electrician. I know enough just to get myself into trouble.  And tonight I didn’t disappoint.  About six months ago, the kitchen light needed a new ballast.  As I was looking at the ballast I noticed that I could purchase a new fixture for about the same amount that I would be spending for just the ballast.  So I purchased the new fixture and installed it myself.  No big deal.  About a month ago I was sitting in my recliner when I heard this loud bang in the kitchen.  I jumped up and ran into the kitchen to find that the shade had fell from the fixture and hit the floor.  The shade broke into several pieces and had to be thrown out.  Since then we’ve been using the fixture with no shade.  I didn’t have a problem with it, my wife did though.

We’re having people over this weekend to celebrate my twin daughters birthday and my wife wanted a new shade for the light in the kitchen.  She didn’t know that I can’t just order the shade and I would have to replace the fixture with a new one.  So, I stopped on the way home and picked up a new light fixture.

After our scout meeting tonight I got home and picked up the ladder from the garage on my way into the house.  I was taking down the old fixture when I noticed that the screws that were holding up the light were actually toggle bolts which meant that the bolt were not going to go back in easily.  I didn’t remember this when I changed out the fixture before but there they were.  I took both bolts out, took the new fixture out of the box and attempted to screw the bolts in place.  Just as I figured, it was not going to happen unless I had two more toggles which I didn’t have.  So I did the next best thing.  At 9pm I moved the ladder into the hallway and with care got into the attic.

Now I’m not a small man by any means so the task of me getting into the attic was not easy.  Not easy at all.  The last thing I needed was to fall through the ceiling.  My wife and daughters were all in a panic but I finally made my way to where the kitchen was and found the two toggles that I needed and made my way back to where the ladder was.  Getting up into the attic was hard but getting back down was almost an impossibility.   I didn’t find it funny at all but both my daughters found it to be hilarious.  I’ll deal with them later.

I got the light mounted but not without issues.  The holes didn’t match up so I need to take the fixture completely down again and lengthen the holes in the fixture so I’ll have some play.  I wasn’t about to go back into the attic again tonight.  I’ll get the parts I need tomorrow and reinstall the fixture again.  Right now the fixture is mounted and it works so that’s all that matters right now.